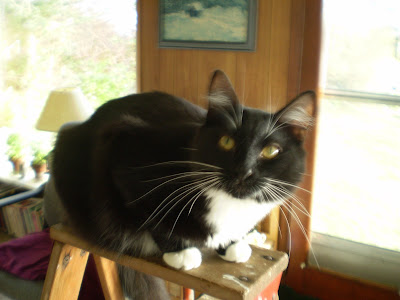 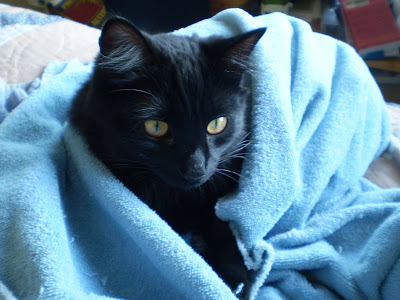 No, that's not a typo. It's not supposed to say kindness or ruggedness. It's rugness, and it refers to a habit that my kittens seem to enjoy. They like to rearrange the rugs in my house. A flat, straightened out rug is BORING! They don't know why I go around straightening all the rugs behind them, and I don't know why they go around messing them up behind me. But we all keep doing what we do, and it's starting to get really funny. So I decided to lay out a rug carefully in their main play area. Not that they don't play wherever they happen to land, but it's what I think of as their main play area. They probably have different ideas entirely about that.

So I laid a rug out on the carpeted floor and just left it there to see what they'd do with it. It wasn't long before the little female, Anjolie, discovered it and decided that it was altogether too tidy for her tastes. So she messed it up. I haven't straightened it up either. I'm leaving it as is. Well, that's not exactly true. When I was playing with her today, I actually messed it up a little bit more and tossed a fake mouse under it so she'd have to go find it. That was a hit with her. She found the mouse and played on the rug with it for awhile. I must say that currently this random rug is her favorite spot in the play area to sit or lay. She stretches out on the rug, rolls around on it, burrows into it, and I just let her have fun with it. It seems to make her so happy.

The male kitten, Bootsy, has not really engaged with the random rug much yet. I've seen him playing with the rugs in the kitchen, so I know he does it too. He probably just doesn't mess about in the rugs as much as Anjolie. They both like to burrow, but he seems to be growing up faster, even though they're litter mates. She's definitely growing out of some of her kittenish ways too, however, because sometimes I'll start to play with her in some way that she used to love, and she just looks at me as if to say, "Mommy, I don't do that now that I'm all grown up."

It will be interesting to see how long the random rug is interesting. I'll have to straighten it up every day, just so it will seem like a "real" rug and not some decoy, which it is, of course. I will say that the rugs in the kitchen are in the same place tonight as they were when I got up this morning and straightened one of them slightly, so perhaps it's working, and I won't have to keep undoing the damage where I need to walk most of the day. I may, of course, have to move the random rug every few days just to keep it interesting.

By the way, the top photo is of Bootsy. He's enjoying the view from atop the ladder I had out to use for painting the interior of my house. The second one is Anjolie helping me fold kitty towels her way, which is quite similar to the way she prefers her rugs. She's also a huge help when I change the bedsheets, as you can imagine. The kittens are nine and a half months old now.
Posted by Beth Mitchum at 8:19 PM