If you happened to be one of my Facebook friends or have read my first collection of essays, then you will know that I absolutely loved my home in Brownsville, Washington. I didn’t want to leave it, but I had a very strong internal nudge to go back to Florida for a time. Not for the length of a vacation, but for a much longer period of time. Like several months. I don’t know how many, but I knew it would be at least three months. There’s no point in trying to keep up with rent on a place when you’re not living there, so I had to let go of my lovely rented house that sat perched on a bank overlooking Puget Sound, Bainbridge Island, and picturesque Brownsville Marina at Burke Bay. I loved living there so suffice it to say that only a very strong compulsion could make me leave. I had that, but it was all intuitive. I simply knew that I needed to be in Florida for a time as the next step in my life. Where I go from there is another matter.

It was not without a lot of internal struggle, but also knowing resignation, that I packed up house and moved back to Florida. I was really hoping to figure out how to get someone else to do the driving of the moving truck, but alas I didn’t figure out how to do that until I got to Florida and found a company who does that sort of thing and has locations near Seattle too. Ahem. That is information I would have loved to have had before I left. I would have jumped at it in a heartbeat. I really didn’t want to drive a moving van (even though it was smallish) all the way to Central Florida, towing my Honda Civic. I didn’t have enough belongings to hire a big moving company. That would have been overkill. So instead I packed the moving truck only about half full, hitched up my car, and loaded up my cats for the 3500+ mile trek to the Orlando area.

I had been warned in a dream that by the time I got near my mother’s house that there would be major upheaval. Okay. Thanks for that lovely thought. I’m glad I had the dream because at least I wasn’t all that surprised when the earth opened up and tried to swallow me on the trip out there. No, there were no earthquakes or volcanoes as indicated symbolically in the dream, but my world did buckle beneath me, and I did have to watch my step carefully. Only it took me so long to get packed up that apparently the dream time sequence shifted to much earlier in the trip.

Had everything happened when I was close to my family, it wouldn’t have been nearly as bad or as expensive. However, I delayed my departure for several days because I simply couldn’t get everything done even though I was working nearly nonstop. My back got re-injured on the first big loading day, and I couldn’t go at the pace I was accustomed to moving, so I had to make up for it by going at it for long hours each day. Even with that effort, I felt like a snail trying to move through molasses. In fact, so much like a snail did I feel that a real live snail attached itself to my back door and stayed there until I left. I have no idea what happened to it after that, but it was still there the day I walked out of there for the last time in the foreseeable future.

That delay in departure apparently shifted everything that was going to happen on the trip to the beginning of the trip instead of the end. Only I didn’t know that was going to happen. I was so tired from packing that I really didn’t know anything except that I didn’t want to pack any more, and I really didn’t want to leave my sweet home. Only I still felt strongly that I absolutely had to leave and go to Florida.

By the time I finally crawled into my car and went to the truck rental place to hitch my car to the already loaded truck, I was completely exhausted and very hot. Hot weather is a rare occurrence in the Seattle area. Super hot weather is even rarer. On the last day of loading, temperatures were in the upper nineties, which is absolutely ridiculous but sort of explained the whole molten lava theme I had dreamed about in connection with the trip. But as I mentioned before the whole nightmarish scene I’d been warned about was supposed to be at journey’s end. Only it wasn’t because I had delayed so long in leaving that I was already entering the earthquake and volcanic upheaval time where I had to watch my every step. I wish I had known that then. I don’t know if I could have stayed put for a few days until it passed or not because of how hot it got for a couple days, and my air conditioner unit was already loaded on the truck. If all hell had broken loose while I was still at the house, who knows what might have happened there. Maybe the snail on my back door was trying to tell me to stay put a little longer and I didn’t listen and paid the price. 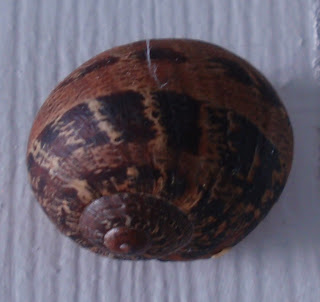 Whatever the snail’s message, I was listening about taking things at my own pace. I had to go slow because my back would tolerate nothing more than my slowest speed. I wish I would have understood when the snail attached itself to my door and refused to budge. I should have done the same thing for a few more days. I’d already been driven to my knees several times literally while trying to pack. My leg muscles gave out several times from the stress on my back, and I would simply collapse wherever I happened to be, like one of those cheap little plastic toys with stringed joints. You squeeze the bottom platform, and it relaxes all the elastic strings, and whatever toy figure is on top of the platform collapses like a marionette whose strings have gone slack.

I could have stayed a few more days, which may have been plenty of time to allow the maelstrom to pass over me, and then perhaps the trip wouldn’t have been so long and harrowing. Whatever the case, I heard the clock ticking on the truck rental and felt as though I’d delayed as long as I could possibly delay. I’d just have to go at a snail’s pace to Florida, and that’s exactly what I ended up doing.

When I finally got the car hooked up, secretly hoping I’d not have to unhook it until the other end, I got in the cab with my cats after bidding an oddly fond farewell to the woman at the truck rental place. I was loosely acquainted with her because she used to work at the Red Apple grocery store in Poulsbo. Poulsbo is a fairly small town so if you shopped there a lot, you pretty much knew all the regular cashiers. We recognized each other, so when I left I gave her a hug, more to represent my hugging goodbye all that I had come to know and love about Kitsap County in particular and the Puget Sound area in general.

There was no one else present for this monumental departure on a long journey that would test me to my core. It seemed rather fitting that a relative stranger would be the only “family” I said goodbye to in that life-changing moment. In my seventeen years of living in the Seattle area, I had always lived and worked with people who had become my family through the connection of friendship and the general goodwill of the folks who live out there. True to their generous and kindly nature to the end, Lindsay gave me a cold can of coke and a bag of Sun Chips to restore me a little bit and then sent me on my way with a big, sincere hug.

I’m in tears now while I write this part. It may sound stupid, but I can’t find words to explain how much that meant to me in a moment when I felt like my world was coming to an end, and everything I had known as my life was slipping through my fingers. I had to drive away from all the friends, who had become my family in the seventeen years I’d lived out there, all in the same moment. It was as though someone had ripped my heart from my chest and chucked it back into the river of life. I could only watch as it floated away past familiar and much love scenery. There was nothing left to do but get into the truck cab, soothe my sweet kitties’ frightened voices, and start on my journey.

Since he was a seasoned traveler, I let my older boy out of his carrier first. Dustin jumped out and settled himself next to me on the platform I’d constructed for him because I knew he’d want to ride shotgun with me. We made this trip together before, although the last time had been in my car. He knew how to travel so he could lead the way. The younger two had not been in a car any length of time since I’d driven them home the day I adopted them two years previously almost to the day of that anniversary. They were pretty scared but I knew that if Dustin acted cool, then they would figure out eventually that mom had not taken complete leave of her senses. They did eventually get the drill of driving all day and romping through the hotel room all night, although it took most of that grueling trip to comprehend it completely. By journey’s end, however, they were also seasoned travelers. Dustin had done his job well.

Beth Mitchum is the author of five novels, one collection of poetry, and one music CD. Her works are available at Amazon.com through the following link: http://tinyurl.com/bethmitchumbooks
Posted by Beth Mitchum at 1:06 PM